In the middle of the 15th century, the Prince Henry the Navigator, ordered the enlargement of a small chapel founded at Restelo under the invocation of Our Lady of the Star, patroness of the sea-travellers. Enriching this invocation, the Prince dedicated this church to Saint Mary of Bethlehem. The chapel was offered to the Order of Christ, with the mission of giving spiritual aid to the sea-travellers.
In 1496, at this same place, King Manuel I ordered the building of a great monastery, after having asked the permission ofthe HolySee. Then he chose Diogo Boitaca (1450-1517) as Master to draw a large architectonic complex: church, cloister, dormitories, workshops, refectories and the palace. This work was projected according to the lines of the Portuguese Late Gothic, known as manueline. In 1517, Master João de Castilho remade the project and introduced elements of a new architectonic language. After the king's death, his successor King João III, gave Diogo de Torralva (1540-1551) the direction of the work.
King Manuel I wanted the new church to keep giving spiritual assistance to the sailors that passed by the Restelo beaches.
He also desired to be buried in this church, as well as his royal descendants.
To accomplish these religious purposes, the king called from Penhalonga, near Sintra, the Jeronimite monks. They remained there till 1833, one year before the dissolution of the religious orders in Portugal.
The first stone was settled on the Epiphany Day, 6th January 1501 or 1502. The strong symbology is represented in the decoration ofthe monastery, which, at the time, turned this place into «a new Bethlehem, a new crib, a new startingpointforChristianity». 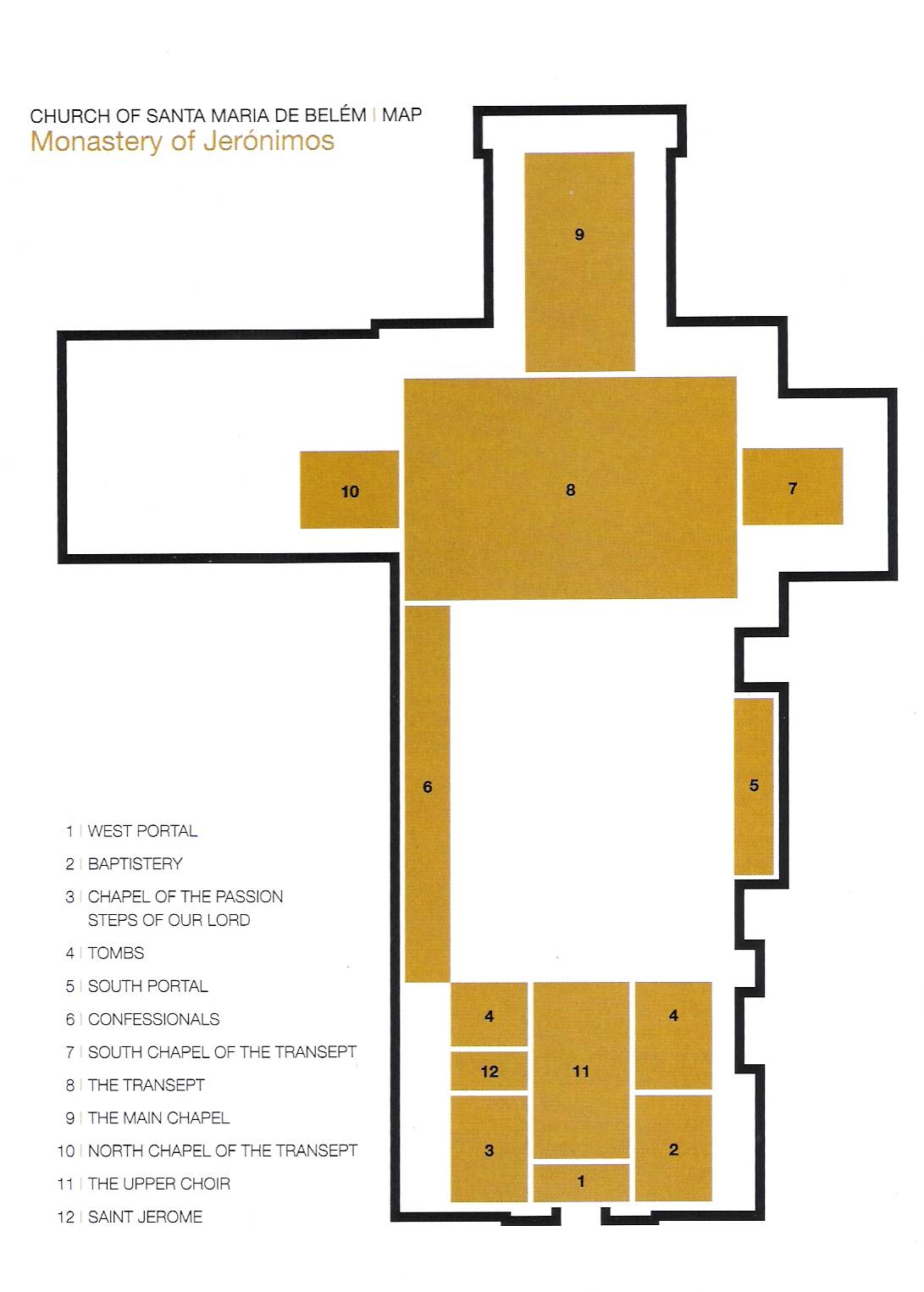 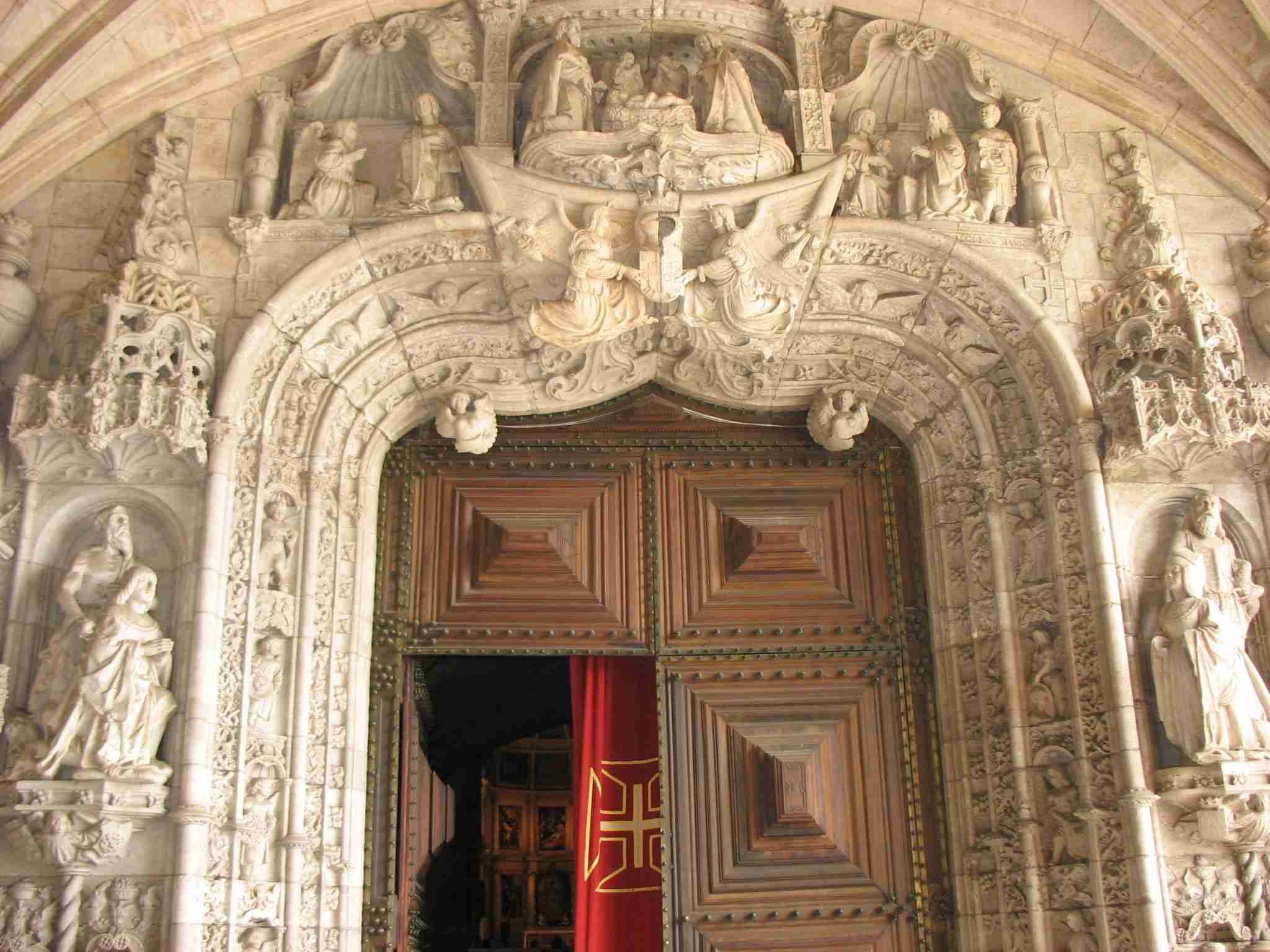 Historical reference: Over the portal, the sculptor Nicolau de Chantarenne pointed out three scenes of the life of Christ and of the Virgin Mary, who is the patroness of the Monastery: the Annunciation, the Crib and the Adoration by the Three Magi. Near the entry, on the left, the king is praying, under the protection of Saint Jerome. On the right, we see Queen D. Maria, protected by Saint John the Baptist. Over the entry, two Angels hold the royal shield. Several sculptures of Saints, Apostles, Angels and different symbols in their niches and consoles complete the composition. 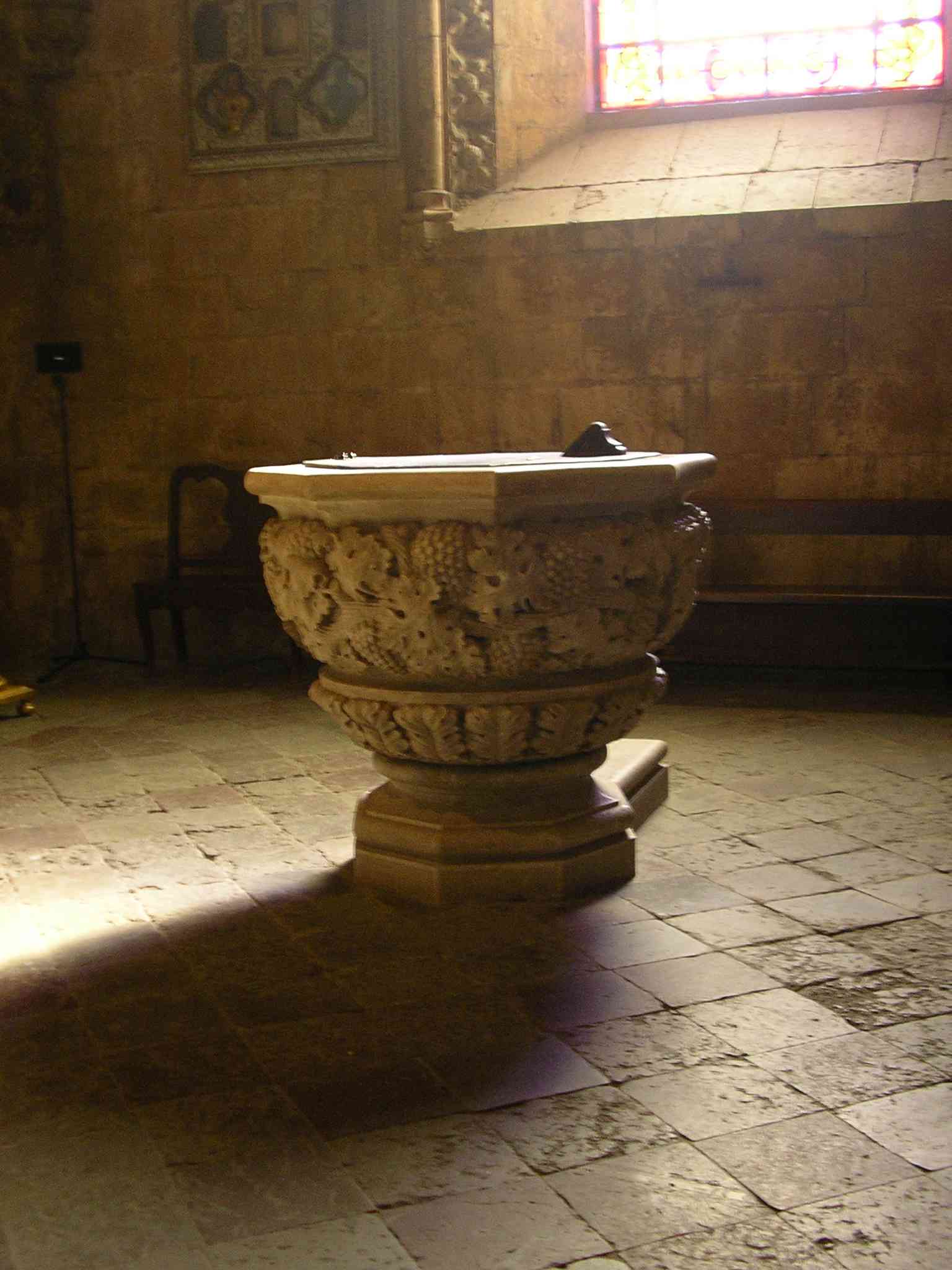 Historical reference: The church's entry gives access to an area that is overlapped by the upper choir. On the right, St. Leonard's chapel today used as the Baptistery, with the baptismal font of the 19th century is lit by a large window on the southern wall. This chapel includes several reliquaries and an image of St. Anthony. 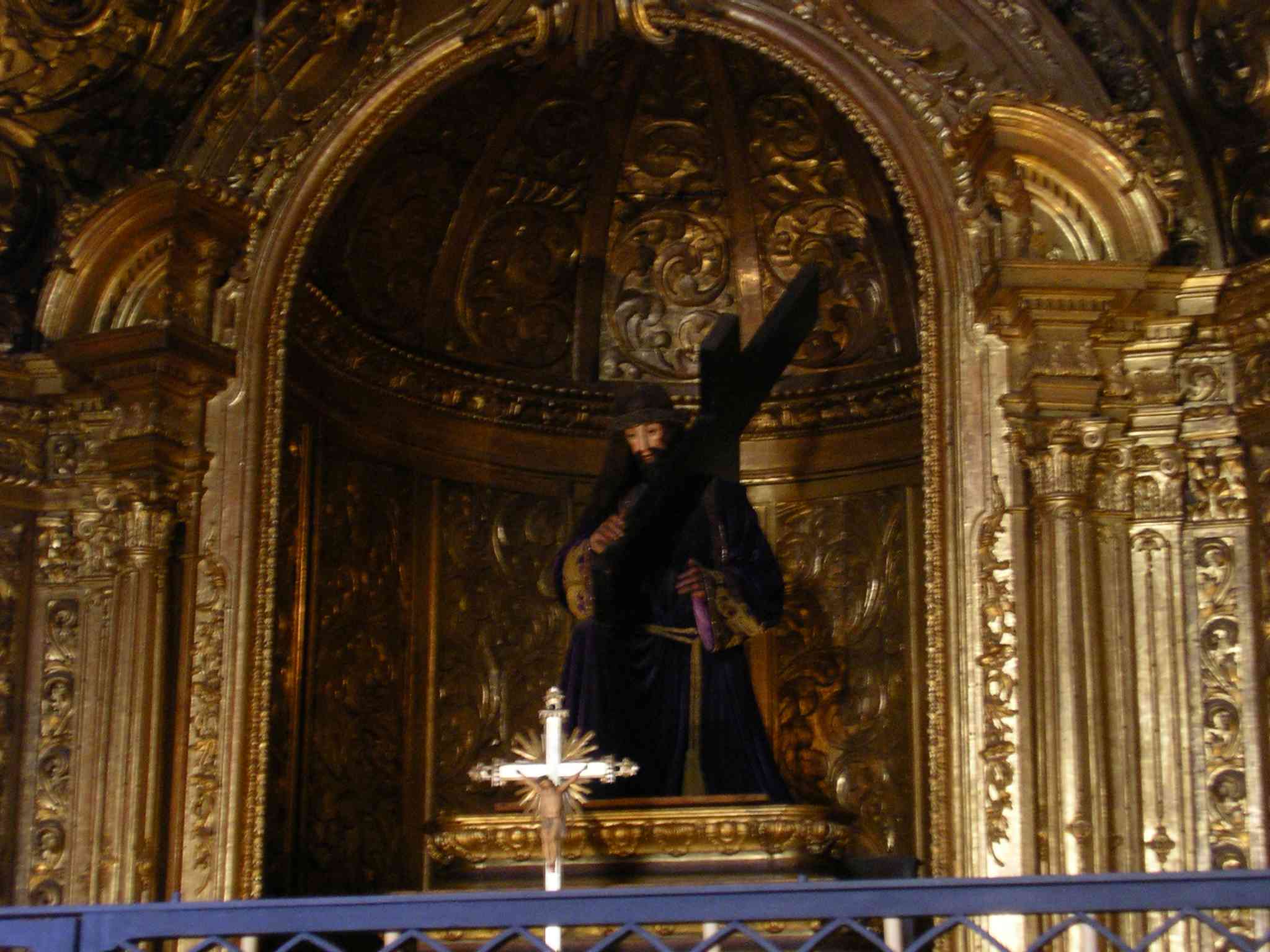 Historical reference: In front ofthe Baptistery we find the Chapel of the Brotherhood of the Cross and the Passion Steps of Our Lord, covered by golden woodcarving dated 1669 and panelled niches with paintings of the time, focusing Christ's Passion.

Historical reference: the tombs of two great historical figures were placed under the upper choir, in 1940: Vasco da Gama's on the left and Luis de Camões' on the right. The tombs were carved according to the neo-manueline model, by the sculptor Costa Mota, Uncle, in 1894. 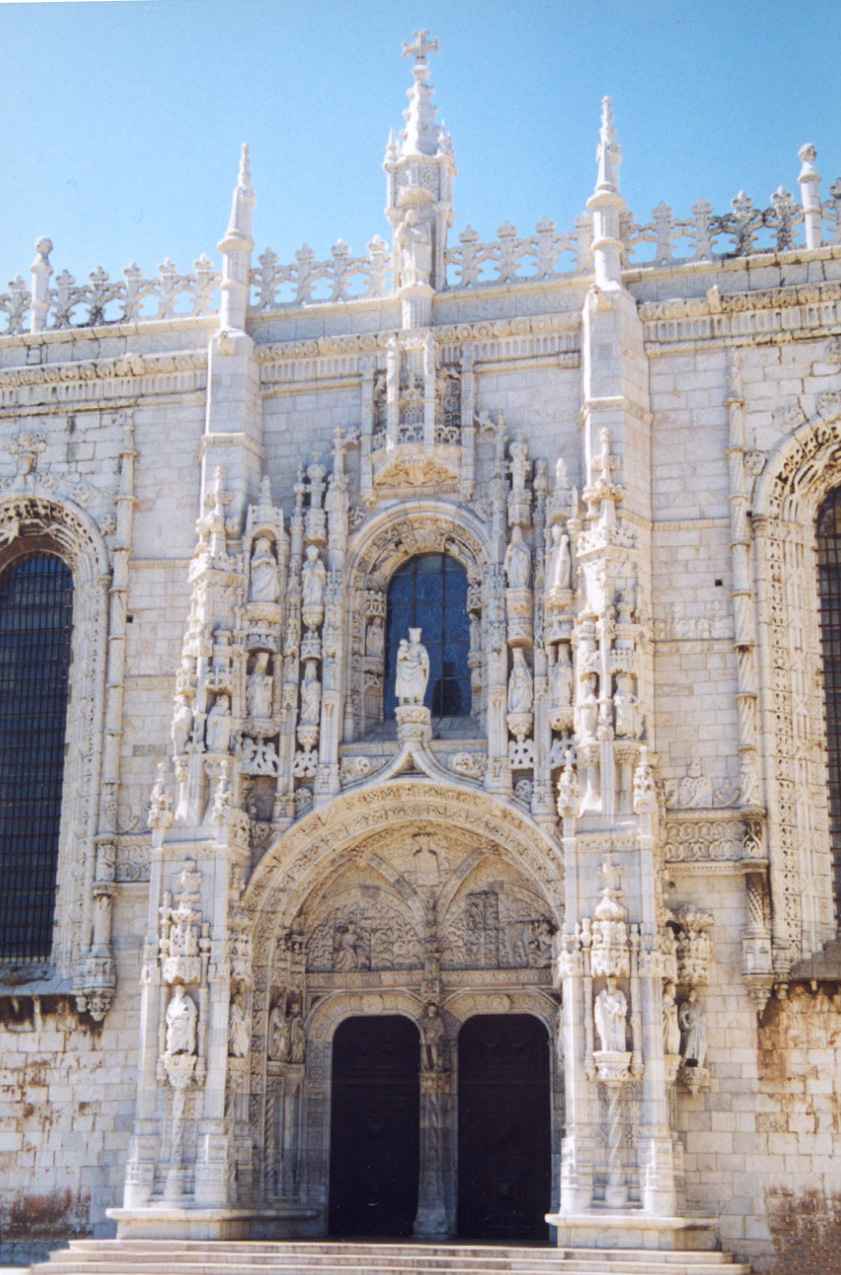 Historical reference: Open to the South, we can admire the splendorous portal that was designed in its final version by Master João de Castilho (1515). It's an architectonic masterpiece of the Late Gothic. The composition, in an ascending perspective, is dominated, also here, by the central image of Our Lady of the Three Kings with the Child. The Virgin is honoured by Prophets, Apostles, Doctors and Fathers of the Church, all of them protected by the Archangel Saint Michael on the top. The door is separated by a handrail column that is the basis for the statue of the Prince Henry the Navigator. In the tympana, it 15 overlapped by the royal arms and bas-relief sided by armillary spheres. The southern wall has large and small windows on both sides of the portal, letting light come in the interior through the coloured 19 and 20th centuries stained-glass windows. 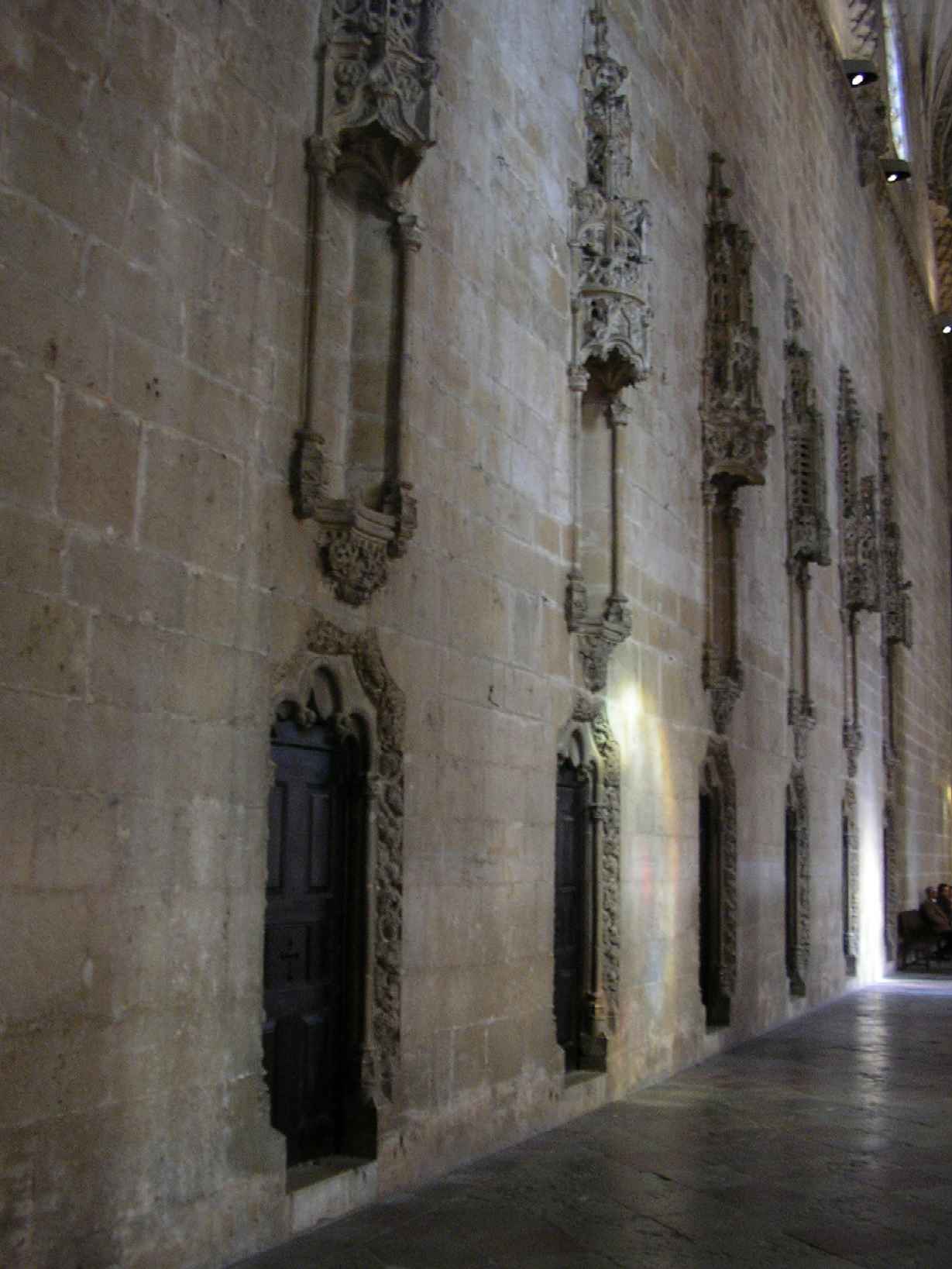 Historical reference: On the opposite northern wall, almost blind, there is a set of twelve doors ­ornamented on the top by laced pinnacles - that give access to the confessionals. The same number of doors can be seen on the side of the cloister. This was the entrance for the monks who came to hear the confessions.It is possible that the twelve niches over the confessionals have been thought to receive the statues of the Twelve Apostles.

7. CHAPEL ON THE SOUTH OF THE TRANSEPT 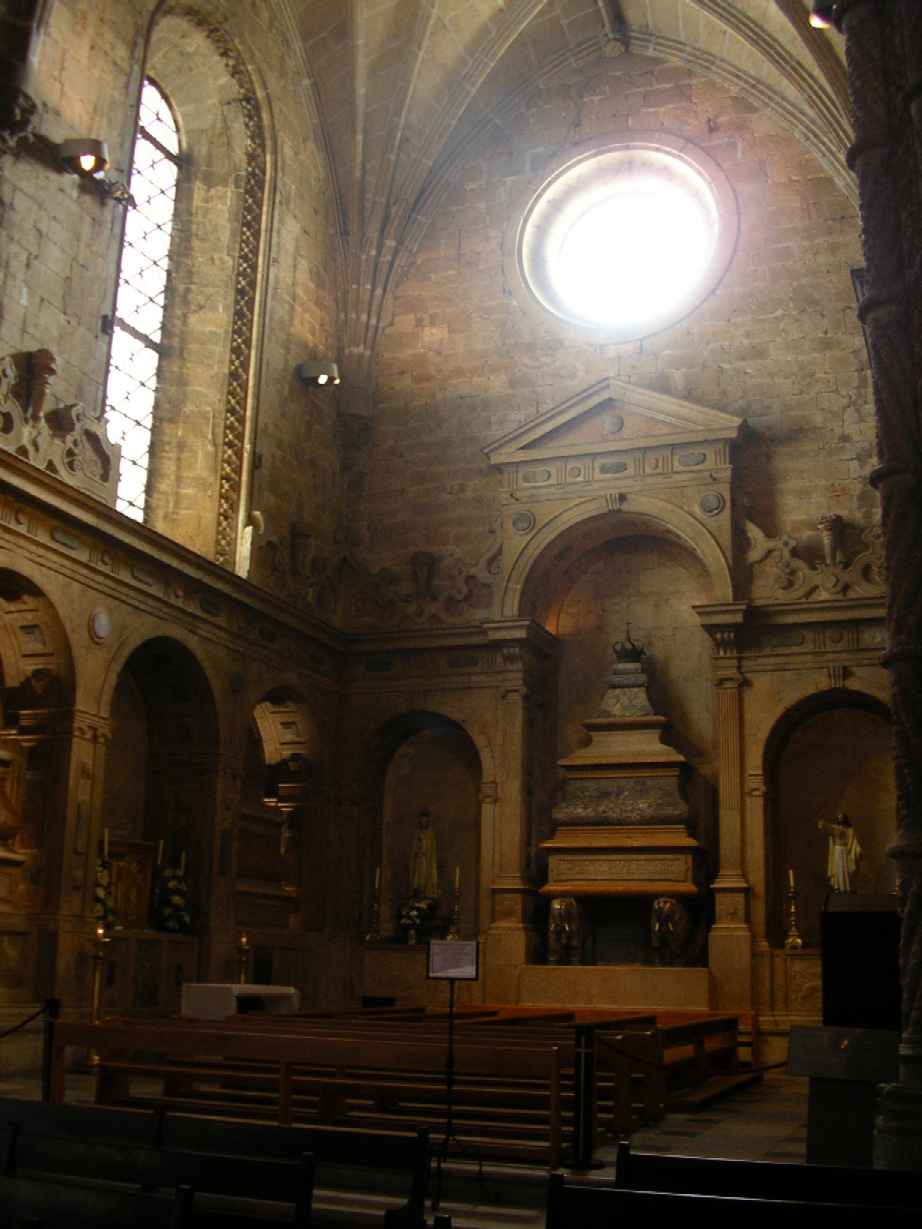 Historical reference: In the chapel on the southern side of the transept, there is a small Tabernacle that also shelters the Holy Sacrament out of the Liturgy hours. This chapel started to be built around 1587 and belongs to the royal pantheon. It was reserved for king D. João III's children and his grandson, D. Sebastião, presumed to have died at the battle of Alcazarquivir, August 4, 1578 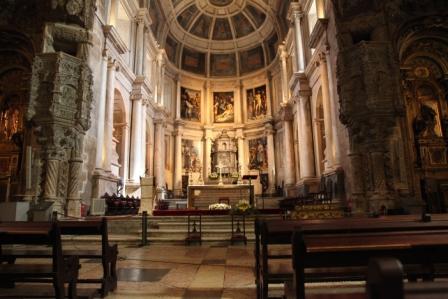 Historical reference: The transept, covered by a vault equally o fthe same height, is divided by ogival ribs, the keystones of which are decorated with bronzy crowns.
At the central part of the transept we have the altar where the Holy Mass is celebrated. The Cross, underthe altar and also between the Altar and the faithful, is a reference point in the celebration. In this space, there are also several altars, covered by golden woodcarving. Among them, we can distinguish the altar dedicated to Saint Jerome, whose image is made of coloured terra­cotta, and was offered by the Pope to the founder King. On the other side, we see the altar dedicated to Saint Paula. She was born in 347, and, at the age of 15, was married to the nobleman Toxotius, with whom she had four daughters, Blesilla, Paulina, Eustochium. and Rufina and also a child, named Toxotius. Widow at the age of 33, Paula committed ali her possessions and energies to spirituallife and to the service of the poor. In Rome, she was a disciple of St. Jerome, under whose direction, in September 385, she left Rome, as a pilgrim, to the Holy Land, and logged at Bethlehem, where she founded several monastic communities. Saint Paula died in the peace of the Lord, the 26 January 404. 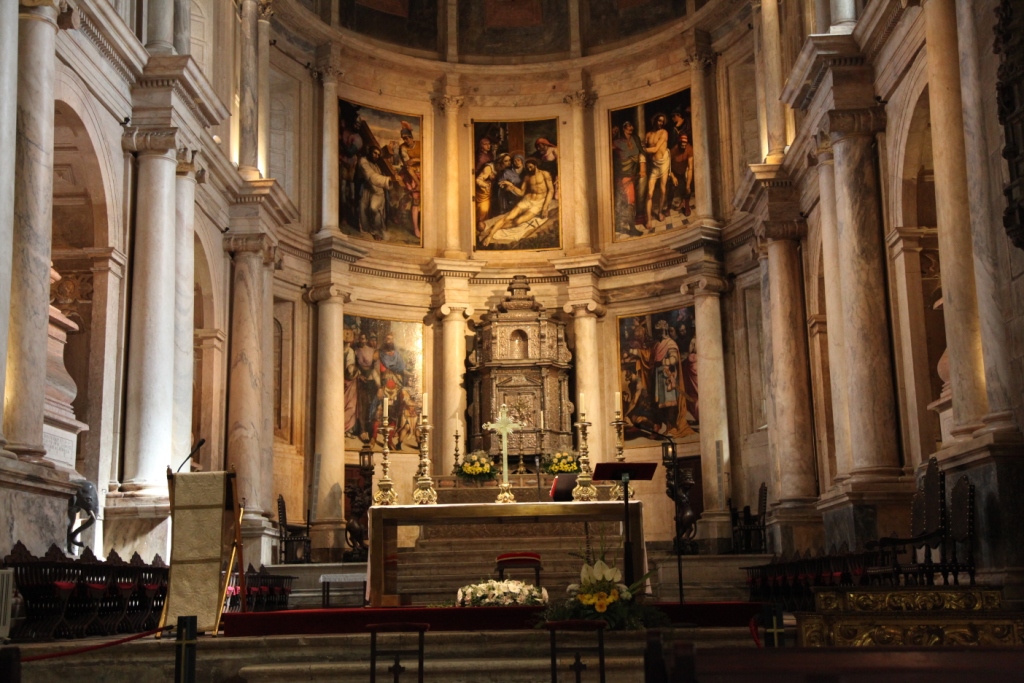 Historical reference: The primitive main chapel of king D. Manuel's time was aimed to serve as a royal pantheon. But later Queen Catarina, regent of the kingdom between 1557 and 1562, ordered some changes. The main chapel, redesigned by Jerónimo de Ruão, shows a new architectonic language, following the classicist style of the time. On the lateral walls, between two orders of columns down the Jonic order, up the Corinthian order are the tombs of thefounder King D. Manuel, his son, King D. João III and their respective wives, Queens D. Maria and D. Catarina.
The retable ofthe high altar, integrated In the architectural composition, consists of mannerist paintings made by Lourenço de Salzedo (1535-78), between 1570 and 1572. They depict scenes of Christ's Passion and the Three Kings' Adoration. In the middle, we can admire a baroque Tabernacle covered with carved silver and placed later. It was made by João de Sousa between 1674 and 1678. For the placement of this Tabernacle, the central board of the mannerist retable - representing the Epiphany of Jesus adored by one of the Three Kings on his knees had to be removed. This scene was reproduced on the Tabernacle's door.

10. NORTH CHAPEL OF THE TRANSEPT 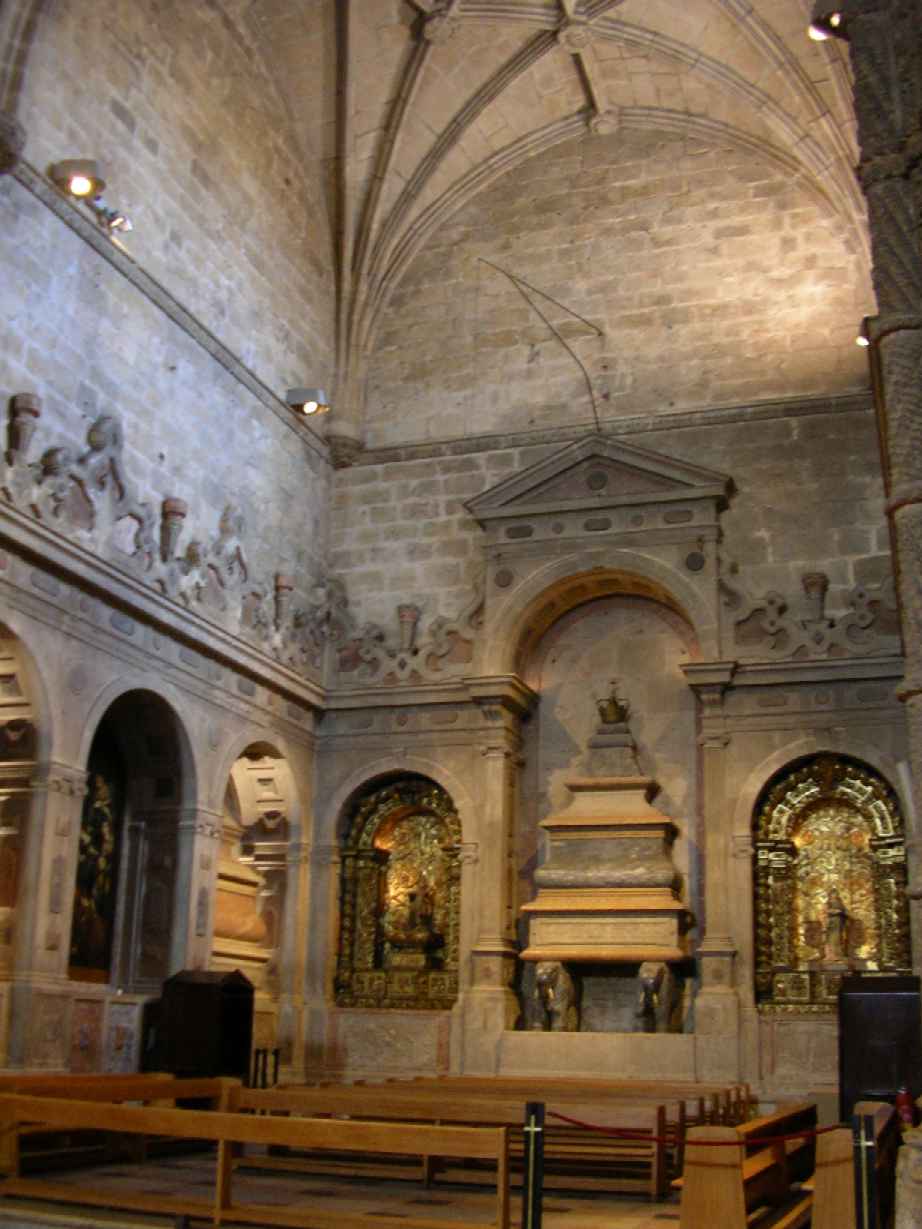 Historical reference: The chapel belongs to the royal pantheon and started to be built around 1587. It was reserved for king D. Manuel's children and it includes two paintings by Fernão Gomes: the Annunciation and the Virgin's birth. 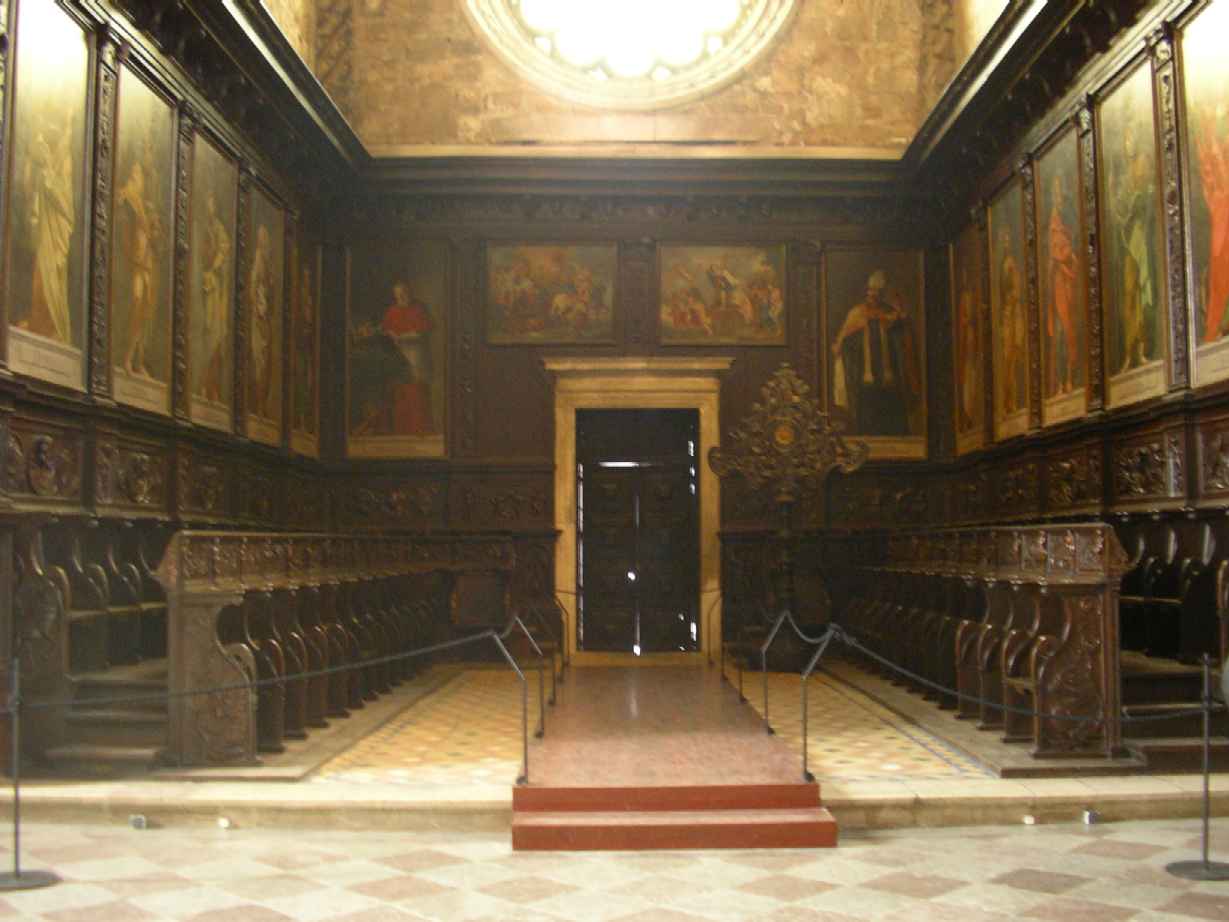 Historical reference: We can admire the superb stalls of Portuguese Renaissance carvenwood designed by D/ogo de Torralva and worked out by the Spanish engraver Diego de Zarza around 1550. There was also the cooperation of the Flemish Philippe de Vries, author of the monumental image of Christ on the Cross. 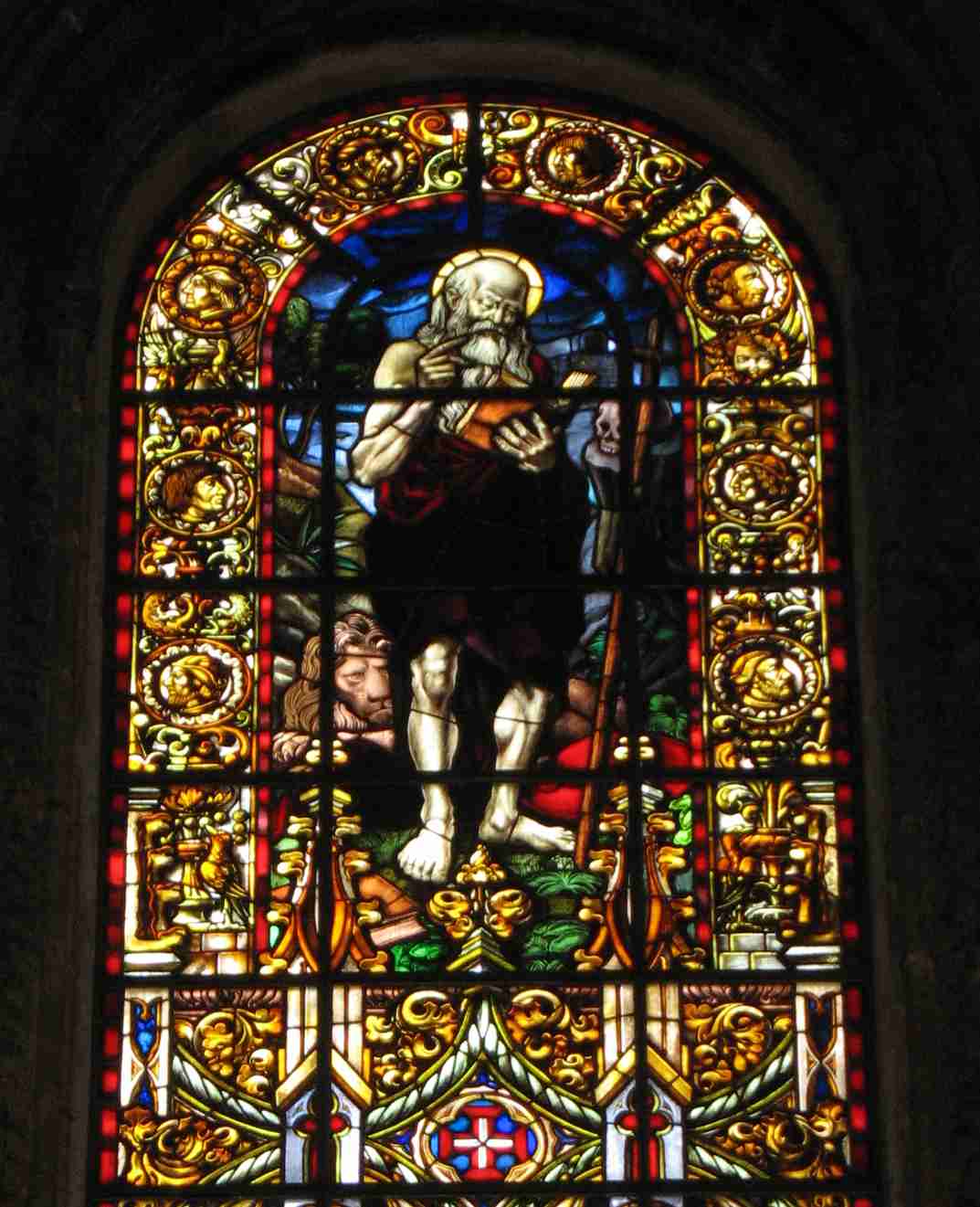 We quote the biographical summary displayed by the Pope Benedict XVI, at the General Audience of 7 November 2007:
«Jerome was born into a Christian family in about 347 A.D. in Stridon. He was given a good education and was even sent to Rome to fine-tune his studies. As a young man he was attracted by the worldly life (cf. Ep 22, 7), but his desire for and interest in the Christian religion prevailed.
«He received Baptism in about 366 and opted for the ascetic life. He went to Aquileia and joined a group of fervent Christians that had formed around Bishop Valerian and which he described as almost "a choir of blessed" (Chron. ad ann. 374). He then left for the East and lived as a hermit in the Desert of Chalcis, south of Aleppo (Ep 14, 10), devoting himself assiduously to study. He perfected his knowledge of Greek, began learning Hebrew (cf. Ep 125, 12), and transcribed codices and Patristic writings (cf. Ep 5, 2). Meditation, solitude and contact with the Word of God helped his Christian sensibility to mature. He bitterly regretted the indiscretions of his youth (cf. Ep. 22, 7) and was keenly aware of the contrast between the pagan mentality and the Christian life: a contrast made famous by the dramatic and lively "vision" - of which he has left us an account - in which it seemed to him that he was being scourged before God because he was "Ciceronian rather than Christian" (cf. Ep. 22,30).
«In 382 he moved to Rome: here, acquainted with his fame as an ascetic and his ability as a scholar, Pope Damasus engaged him as secretary and counsellor; the Pope encouraged him, for pastoral and cultural reasons, to embark on a new Latin translation of the Biblical texts. Several members of the Roman aristocracy, especially noblewomen such as Paula, Marcella, Asella, Lea and others, desirous of committing themselves to the way of Christian perfection and of deepening their knowledge of the Word of God, chose him as their spiritual guide and teacher in the methodical approach to the sacred texts. These noblewomen also learned Greek and Hebrew.
"After the death of Pope Damasus, Jerome left Rome in 385 and went on pilgrimage, first to the Holy Land, a silent witness of Christ's earthly life, and then to Egypt, the favourite country of numerous monks (cf. Contra Rufinum, 3, 22; Ep. 108, 6-14). In 386 he stopped in Bethlehem, where male and female monasteries were built through the generosity of the noblewoman, Paula, as well as a hospice for pilgrims bound for the Holy Land, "remembering Mary and Joseph who had found no room there" (Ep. 108, 14). He stayed in Bethlehem until he died, continuing to do a prodigious amount of work: he commented on the Word of God; he defended the faith, vigorously opposing various heresies; he urged the monks on to perfection; he taught classical and Christian culture to young students; he welcomed with a pastor's heart pilgrims who were visiting the Holy Land. He died in his cell close to the Grotto of the Nativity on 30 September 419-420".
What can we learn with Saint Jerome? The Pope Benedict XVI answers: " It seems to me, this above all; to love the Word of God in Sacred Scripture. St Jerome said: "Ignorance of the Scriptures is ignorance of Christ". It is therefore important that every Christian live in contact and in personal dialogue with the Word of God given to us in Sacred Scripture".
Saint Jerome's image is usually represented with
three iconographic types: the Penitent in desert, the Studious in his cell, the Doctor of the Church. Saint Jerome's life inspired a hermit movement of different religious families, in the 14th century Italy. The Jerome monks wore a white habit, over which they put the brown scapulars. They followed the Rule of Saint Augustine and they devoted themselves to the contemplation and the study.
At present there are two communities of Jeronimite monks in Spain: one at Santa Maria del Parral (Segovia) (contact in the Web: http://www3.planalfa.es/msmparral/parral/fondo.htm) and the other at St. Jerome of Yuste (Caceres). There a several monasteries of Jeronimite nuns, and two feminine congregations: the «Jeronimite of the Adoration» and the «Jeronimite of Puebla».